Acts of the Apostles Online Commentary (14)


This is the fourteenth entry in the Bible Junkies Online Commentary on the Acts of the Apostles. This post examines the third summary of the communal life of the disciples of Jesus in Jerusalem.
For previous entries, please now go to the Complete Acts of the Apostle Commentary, where you can find links to each of the entries updated after each new blog post. 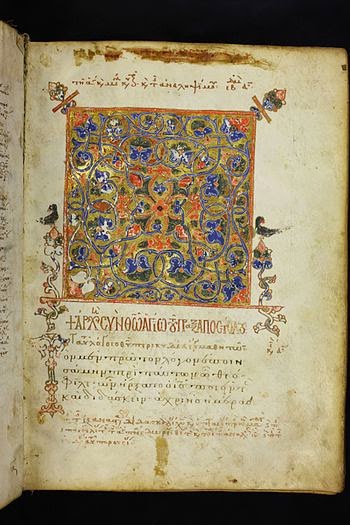 3. Contents:
C) Work of Peter and the Apostles (3:1-5:42): Many Signs and Wonders (5:12-16):
12 Now many signs and wonders were done among the people through the apostles. And they were all together in Solomon's Portico. 13 None of the rest dared to join them, but the people held them in high esteem. 14 Yet more than ever believers were added to the Lord, great numbers of both men and women, 15 so that they even carried out the sick into the streets, and laid them on cots and mats, in order that Peter's shadow might fall on some of them as he came by. 16 A great number of people would also gather from the towns around Jerusalem, bringing the sick and those tormented by unclean spirits, and they were all cured.  (NRSV)
This section, Acts 5:12-16, is seen by most commentators as the third summary in Acts, with the first being Acts 2:42-47 and the second being Acts 4:32-35, as evidenced by Fitzmyer (Acts, 327) and Robert J. Dillon (NJBC, 738).  There are two interesting, though separate, issues of transition with respect to this section.

The one has to do with what seems like a literary “seam” between Acts 5:13 and Acts 5:14, in which we are told “none of the rest dared to join them” and then immediately following “yet more than ever believers were added to the Lord.” This appears to join two sources together, one noting the awe and repellence which the apostles produced through their signs and wonders, the other noting the attraction which the community created by these same signs and wonders.

The second transition is from this summary to the second arrest of the apostles which follows immediately after in Acts 5:17-18. The summary stands alone, but makes more sense in light of these verses, which read,

17 Then the high priest took action; he and all who were with him (that is, the sect of the Sadducees), being filled with jealousy, 18 arrested the apostles and put them in the public prison.
I will deal with this second transition first.

T.E. Page in his study of the Greek of the Acts of the Apostles says of this section, and I will quote it at length, that it is:

A brief description of the state of the Church (viz. rapid growth and increasing influence due to the miracles wrought by the Apostles), introduced to explain the strong and decisive action of the high priest and rulers described in ver. 17
That this is the connection is clear from the use of the imperfect tens vv.12-16, contrasted with the dramatic anastas of v. 17 and subsequent aorists. The imperfects describe a state of things during a period of some duration; the aorists express the single action which resulted from that state of things.
The paragraph describes,
(  1)    The miracles wrought by the Apostles.
(  2)    The gathering of all believers in Solomon’s porch.
(  3)    The fact that though none of the rest (i.e. the priests and rulers) dared to join them, yet the people magnified them.
(  4)    The great increase of believers, naturally resulting (hôste) in a great public manifestation, viz. the placing of sick folk in the streets by the inhabitants of Jerusalem and even bringing them in great numbers from neighbouring cities.

It was this public manifestation which at last roused the ‘envy’ of the rulers. (Page, Acts, 112)
The important point Page makes here is that we understand the summary here in light of what comes in the following verses. Greek imperfect tenses generally reflect ongoing action in the past, while the aorist tense more usually reflects “the single action which resulted from that state of things.” That single action is revealed in the use of anastas (“took action”) in Acts 5:17, “a pictorial word representing the commencement of vigorous action. It is frequent in Luke and Acts” (Page, 113). This summary then is an important statement of the actions of the believers in Jerusalem, but also the important transition to the arrest which will follow.

The other transition, mentioned above, has to do with some tension between two verses: why are people staying away in one verse and then joining in greater numbers in the next verse? Here are the verses from Acts 5:13-14 again:

13 None of the rest dared to join them, but the people held them in high esteem.
14 Yet more than ever believers were added to the Lord, great numbers of both men and women,
As Page notes above, he thinks that “the rest” (hoi loipoi) describes the priests and rulers, so there is no tension here with “the people” (see also Fitzmyer, Acts, 328). Richard Pervo notes that some people understand “the rest” as the other Christians separate from the apostles, but this creates a difficult bridge among Christians (Pervo, Acts, 135-36).  Luke Timothy Johnson takes a similar tack, arguing that the “them” who no one “dared to join” is specifically the apostles, and so people left them alone, but still joined the community (Johnson, Acts, 95; see Fitzmyer, Acts, 328).

At the risk of simplifying too greatly a difficult exegetical issue, I think it is possible that Luke has combined two traditions or sources from the Jerusalem Church. The first indicates that in light of the “signs and wonders” done by the followers of Jesus on the Temple people were in awe; in this case “the rest” is the same as “the people.” A second tradition which Luke has joined to it simply indicates that this did not remain the case, but at a later point “more than ever believers were added to the Lord, great numbers of both men and women.” It is perhaps clumsy literarily, but it also reflects a reality: mysterious or powerful deeds both repel and attract, frighten and excite people.[1]
And that is at the heart of this section: “many signs and wonders were done among the people through the apostles” (Acts 5:12). According to Acts 5:15-16, the sick were carried out into the streets “in order that Peter's shadow might fall on some of them as he came by” and “a great number of people would also gather from the towns around Jerusalem, bringing the sick and those tormented by unclean spirits, and they were all cured.” These deeds are attracting people, but also causing consternation. Naturally, the readers of Acts are to understand that God’s power, the name of Jesus, and the Holy Spirit rests behind and empowers the apostles, but is that how the authorities will view these acts?

Next entry, the disciples of Jesus are arrested again.

John W. Martens
I invite you to follow me on Twitter @Biblejunkies
I encourage you to “Like” Biblejunkies on Facebook.
This entry is cross-posted at America Magazine The Good Word
[1] From the Gospel tradition see the Gerasene demoniac story from Mark 5:1-20 for the repellence and attraction of spiritual power.
Posted by Bible Junkies at 1:04 PM