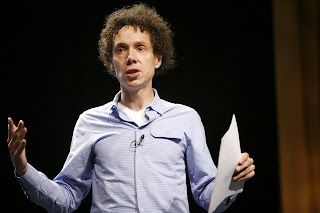 I like Malcolm Gladwell, but I didn't think that much of his recent video on Ted Talks.  It is a good reminder that even brilliant people can have poor approaches to scripture.
What Gladwell does in his books is to upend conventional wisdom and his new book, David and Goliath, discusses why we consistently underestimate underdogs.  The book is not really about the story found in 1 Samuel 17, although he does address the story in his Ted Talks video.

There, he describes to his audience how we should not have been surprised that David defeated Goliath. “All he had was a sling,” is our first mistake, because we underestimate David’s choice of weaponry.  The sling was a legitimate weapon of war, not a child’s slingshot, and the Shephelah, where the battle took place, has especially hard rocks. The second point is that Goliath was dressed as heavy infantry, and expected David to fight him in close combat. But why would David do that? Rather, David chose a strategy that suits his abilities.


Where I really start to have difficulties, is Gladwell’s medical diagnosis of Goliath’s symptoms: acromegaly, or a tumor on the pituitary.  Gladwell notes that David is carrying one staff, but the giant taunts him, saying that he has brought "sticks." He sees this as evidence of double vision, an effect of the tumor pressing against the brain's visual nerves. Further, people with this tumor are nearsighted, and Goliath calls for David to come near. Why? Because he cannot see him.

Gladwell has approached this story as many have approached biblical texts, wanting to provide rational or natural explanations for what the story presents as miraculous or accomplished by God.  For example, some have tried to explain away the plagues in Egypt as an algae bloom (red water), which led to an abundance of flies, frogs, and dead animals, etc.  Other examples are attempts to explain Jesus' walking on the water (there was a sandbar), Korah being swallowed by the earth (plate tectonics, of course), the multiplication of food (people were compelled to share their hidden food), and even Jesus' resurrection (he was comatose, not dead).

The problem with this type of approach is that it is neither fish nor fowl; it is the uneasy product of a fundamentalist reading of the Bible by one who doesn't believe in the supernatural.


Gladwell is reading the Bible from what is functionally a fundamentalist perspective.  First of all, he assumes that this account describes an historical event, rather than a legend or a literary trope demonstrating the exploits of a young hero (in the manner of Paris, for example).  Furthermore, he is assuming that the very dialogue between the combatants was faithfully recorded and the descriptive elements accurately portrayed.  I think even very conservative biblical scholars would say that things such as dialogue are unlikely to be historically accurate.

Yet, while he is reading in a fundamentalist manner, he seemingly does not believe in divine intervention.  While following the narrative closely, when the text attributes David's victory to the power of 'the God of the armies of Israel,' Gladwell leaves the narrative and puts forward his list of reasons for David's success.

I don't know whether our ancient storyteller believed that this was an historical account and that he was faithfully transmitting the details and dialogue.  What I do know is that, in his description of the Philistine champion, he was not trying to describe Goliath as a lumbering, nearsighted, lump of a man who could easily be defeated by a boy.  Our storyteller was trying to convey that the God of Israel was with this particular boy, empowering him to defeat the powerful enemy.

To be clear, I do not think that one needs to believe in divine intervention to properly read the Bible; it is enough to recognize that the storytellers in ancient Israel did.  I suggest that when we read narrative accounts that depict divine power, and use rational explanations to describe how they happened, we are misreading those texts.  That approach misses the entire theological point and is left only with the pitfalls of fundamentalist interpretation.