Unscrolled: 54 Writers and Artists Wrestle with the Torah

I wanted to call readers' attention to a new book, Unscrolled: 54 Writers and Artists Wrestle with the Torah, which was released on September 24, 2013. The book will be reviewed on this blog, but that will require actually reading it, something which will happen in the near future but has not happened yet. The book is too fascinating, however, not to draw your attention to it now. My fascination is based upon the editor the book, who seems also to have been the motor behind the project, Roger Bennett, and the authors who were tasked to write on the Torah, a variety of writers and artists. 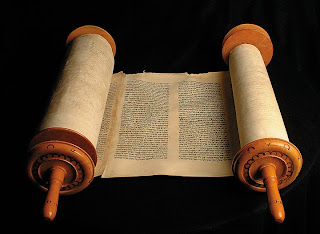 The book follows the 54 readings which take place in the synagogue in the Jewish year. From the website comes this description,

Imagine: 54 leading young Jewish writers, artists, photographers, screenwriters, architects, actors, musicians, and graphic artists grappling with the first five books of the Bible and giving new meaning to the 54 Torah portions that are traditionally read over the course of a year. From the foundational stories of Genesis and Exodus to the legalistic minutiae of Leviticus, Numbers, and Deuteronomy, Unscrolled is a reinterpreting, a reimagining, a creative and eclectic celebration of the Jewish Bible.

Some of these creative (re)imaginings include "stories, poems, memoirs, plays, infographics—plus a Web search, a graphic novel, and a psychiatric transcript." Yes, I know: this is why I described the project as fascinating, but it could also be described as exciting. For Biblejunkies, the Bible in itself is endlessly fascinating and exciting, but the process in which the authors and artists are engaged is the constant and essential process of interpretation and reinterpretation that the biblical text demands.

The project emerges out of an organization called Reboot, which describes itself as a

national network of young, creative Jews founded on the belief that every generation must grapple with the questions of identity, community, and meaning on its own terms. Reboot created over 100 projects, including the National Day of Unplugging, the international architecture contest Sukkah City; and the Idelsohn Society for Musical Preservation, a record label and archive dedicated to tracking down lost Jewish music and the musicians who created it.

Roger Bennett has been instrumental in the organization Reboot, but I know him best as one of the Men in Blazers, who with Michael Davies discusses Premier League soccer on a radio show and on a podcast available on the Grantland network. It is difficult to describe the erudition, joy and deep menschlichkeit on display in this show about soccer (saw-ker, for long time listeners), but soccer is the means by which the weighty things of life are bandied about, such as poetry, politics, friendship and, of course, football. From the podcast alone, and what I have heard from Roger Bennett, I have every confidence that Unscrolled will be a joyous and complex ride through the Torah.

The website itself offers the opportunity to engage and offer your own commentary on Scripture (simple or deep; check it out) and even download some chapters from the book. I would encourage everyone to peruse the website - the idea of communal Torah interpretation is - what's the word? - inspired! New and fresh, but as old as the Torah itself. For the challenge of interpretation is something that each religious community must take up anew each age, as Bennett wrote in the introduction . An ancient example: Rabbi Ishmael said to Rabbi Eliezer ben Hyrcanus, "behold, you say to scripture, 'be still, while I interpret you'" (Tazria Negaim, 13.2, W. 68b). But scripture cannot stand still and neither can interpreters.

Posted by Bible Junkies at 8:10 PM