The "Five Books of Moses": Defining the Pentateuch

I am just starting my lectures on the origin and purpose of the "five books of Moses" and my first-year graduate students are getting excited about reading the Pentateuchal texts. Before that though they need to be introduced to the origins and purpose of the Torah and I am sure there would be a lot of questions. Here is a brief exposition on what I plan to cover in the first few classes. 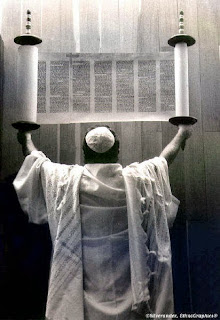 The first five books of the Hebrew Scriptures are known as the Pentateuch (Gk. πἐντε [pente= five]; τεῦχος [teuchos = case]). These books are essentially arranged in the form of a narrative that begins with the creation of the world and finishes with the death of Moses, right before the people of Israel make their entry into the Promised Land. Although these books contain a great amount of legislature and regulations, in actual fact they are not books of law.


The Hebrew term תוֹרָה (Torah), by which the Pentateuch is known, is most of the times conventionally translated as “law”, but its meaning is better represented as “teaching”, “guidance” or “instruction”. Therefore the Pentateuch does not present itself as a comprehensive set of rules for life, nor does it develop a consistent theological system, nor does it typically narrate the past to illustrate obvious or explicit moral truths.

Although in most centuries the Pentateuch has been known as “the five books of Moses”, perhaps because he is the major human figure in the narrative, it has long been acknowledged that he cannot have been the human author, and that the Pentateuch is in fact anonymous. Some scholars believe that within the Pentateuch itself, Moses  could be attributed with the authorship of relatively small portions of its contents: Exodus 21-23, the laws known as the “Book of the Covenant”; Numbers 33, the itinerary of Israel in the wilderness; Deuteronomy 5:6-21, the Ten Commandments. These sections are among the elements generally considered most ancient by historical specialists. I find this most interesting.  Whether or not Moses can be called the author in a literal sense of anything in the Pentateuch, it is not impossible to hold that the work and teaching of a historical figure were the stimulus for the formation of the Pentateuch.

The overwhelming tendency in biblical scholarship has been to explain the origin of the Pentateuch as the outcome of a process of compilation of various documents, or better now, traditions or sources from different periods of Israelite history. According to the classical Documentary Theory of the Pentateuch, formulated by Julius Wellhausen and others in the nineteenth century, the oldest written source of the Pentateuch was the document J (so called from its 'author', the Jawhist or Yawhist, who used the name יהוה (Yahweh) for God. This source dates from approximately the ninth century BCE. The E document (from the Elohist, who employed the Hebrew term אֱלֹהִם (ʼĕlohīm) for God, would have originated during the eighth century. Many scholars think that the J and E sources were combined by an editor in the mid-seventh century. The book of Deuteronomy, a separate source dating from 621 BCE was added to the JE material in the mid-six century. The final major source, the Priestly work (P), was mingled to the earlier sources about 400 BCE. With all of this, the Pentateuch as we know it probably came into existence no earlier than the end of the fifth century BCE.  Nothing that I have mentioned here concerning this process remains unchallenged, and indeed the theory as a whole can no longer be called the consensus view. It has become clearer with time that the written documents' proposition is not holding well anymore and that most scholars prefer now to talk more about the JEDP work as sources or traditions; nevertheless, no other theory has gained any wide support.

At this point, the question would be: what is the organizing principle of the Pentateuch as a whole, that is, considered as a literary entity? An initial answer is obviously that the subject matter of the Pentateuch is sufficiently unified to create the impression of general coherence in the work. The last four books, beginning with the birth of Moses and ending with his death, have a strong narrative connection. However, as I agree with the vast majority of scholars, it is not accurate to regard the Pentateuch as primarily a 'biography of Moses', for then there would be no evident connection between these last four books and Genesis, for this book is a narrative of the ancestors of Israel in general and not especially of Moses’ forebears.

Some authors have suggested that certain brief summaries of the Pentateuchal narrative found in Deut. 26:5-10 and 6:20-24, indicate the fundamental story line of the Pentateuch as a whole. These texts seem to have the character of Israelite confessions of faith in the God who had directed their history. These essential elements expressed in these passages express certain “profession of faith” which corresponds (although roughly) with the content of the Pentateuch. However, the events at Sinai are remarkably omitted and anyone would acknowledge they are considered a major section in the Pentateuchal narrative. Therefore, we would need a more conceptually unified theme in the Pentateuch than a simple summary of its narrative.
I agree with many scholars’ opinion that the mainspring of the action in the Pentateuch seems to be the divine promises mentioned in Genesis 12:1-3 (that are repeated with various emphases in 15:4-5, 13-16, 18-21; 17:4-8; 22:16-18; which also are alluded in some other passages throughout the Pentateuch). This promise contains three elements: a posterity (“I will make you a great nation” v.2a) a relationship (“I will bless you” v.2b) and a gift of land (“the land I will show you” v. 1b). In this fulfillment and the partial non fulfillment of these promises we can see the theme that would permeate the whole narrative of the Pentateuch.

The theme of the posterity is is the evident motif of the Book of Genesis. We can see in the Abraham cycle of stories the significance of the many Genesis narratives of threats to the family survival: the sterility of matriarchs (11:30; 25:21; 29:31), the strife between brothers (often with near-fatal consequences, 4:8; 21:8-19; 25:23, 26; 27:42-45; 37:11, 23-24, 36), and the repeated famines and difficulties in the land of promise (3:17-19; 12:10; 26:1; 42:5).
The theme of divine-human relationship is expressed most strongly in the Books of Exodus and Leviticus. The events of the Exodus (10-15) and the theophany at Mount Sinai (19) explain what the words of the promise (“I will bless you”, “I will make may covenant between me and you”, “I will be your God”) meant. The blessing comes in the form of salvation from Egypt and the gift of the Law. The covenant of Sinai, of which the opening words are “I am YHWH your God” (20:1) formalize the relationship foreshadowed by the covenant with the forebears. The Book of Leviticus describes how the relationship now established by YHWH is to be maintained. Therefore the sacrificial system is to exist, not as a human means of access to God, but as the divinely ordered method to repair and atone for failures in keeping the covenant. Finally, the theme of the land dominates the books of Numbers and Deuteronomy. Numbers begins with preparations for the conquest of the land, and ends with the actual occupation of that part at the east of the Jordan by two and a half tribes. Deuteronomy sets before the people laws for their life under God, explicitly “in the land which YHWH, God of our fathers, is giving to you” (Deut. 4:1).

Now, none of the promises is fully realized within the narrative of the Pentateuch itself. The posterity as ‘numerous as the sand on the seashore’ is a promise that has only begun to see its realization by the time the Pentateuch is over. The relationship of blessing and of covenant is a continuing and never completely fulfilled promise, and the land, at the end of the narrative of the Pentateuch is a promise that is partially fulfilled.  The whole structure of the Pentateuch, therefore, seems to be shaped by the promises to Abraham, which are never final but always point beyond themselves to a future yet to be realized. Although this opinion I share with others is also susceptible to challenge, since I acknowledge that there are several more ways where we can find some cohesion within the Pentateuch, (as many as Theology of the OT textbooks present) so far this is the one that makes more sense to me.

These considerations should serve as a basic review or reading guideline when non-experts approach the Pentateuch writings. Our hope is to make their study more fruitful and appealing.

Posted by Juan Miguel Betancourt at 9:35 AM