It’s Not Worth It: Possessions, Wealth and Debt in the Gospel of Luke (Part 2)

This is Part 2 of the series on Wealth and Possessions in the Gospel of Luke. Part 1 appeared here.

We are lead by the first ten verses of Luke 15 to one of the most beloved parables in all of the Gospels, the Two Sons, plural, since one has wasted money, but both have wandered away from their Father. In these two short preceding parables Jesus explains, when grumblers complain of his practice, that sinners are worth seeking out: one seeks out a lost sheep from a flock of one hundred, and one seeks out a lost coin in every nook and cranny. In these cases, though, Jesus uses these examples to demonstrate that genuine value, the truest worth, symbolized as a sheep or a coin, belongs to human beings. Will you search for your lost possessions asks Jesus? Of course you will; why would you think that God would not seek the most valuable of all possessions, you? 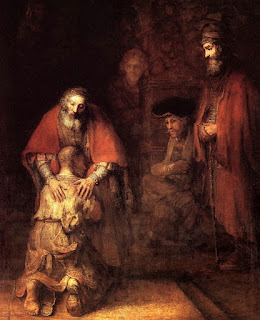 15:11-32: This is what is at stake in the Two Sons: finding the most valuable of possessions and welcoming them home. Though the youngest son wasted his inheritance, his wealth and possessions – “he squandered his property in dissolute living” (15:13)–the Father waits for his son to return and welcomes his son back with open arms: “But while he was still far off, his father saw him and was filled with compassion; he ran and put his arms around him and kissed him” (15:20). What was essential for the younger son to return was repentance, but his Father was waiting as his return is far more valuable than any earthly possessions he has lost or wasted.

But pay attention to the eldest son, who is burning up with anger due to the recklessness of his younger brother and his wasting of his worldly possessions. The older son “became angry and refused to go in. His father came out and began to plead with him” (15:28). The older son’s concern has to do with justice: I have been working for you “like a slave” – as if! - and I have never had a big party thrown for me! “Then the father said to him, "Son, you are always with me, and all that is mine is yours. But we had to celebrate and rejoice, because this brother of yours was dead and has come to life; he was lost and has been found' “(15:31-32). The older son is angry; in terms of spiritual closeness, he has wandered far from the Father, but are his concerns petty, regarding possessions and the squandering of physical property? Naturally, the most serious point is that the true value rests with human beings, who belong at home, who belong with the Father, but the role of material possessions is not insignificant: we want them, like the youngest son sometimes, or like the oldest son other times, and we need at least some of them some of the time! Yet, the value of these possessions is fleeting and possessions can be lost or their true value overinflated. Real value is spiritual value which is found only amongst living, breathing human beings.

16:1-9: Without question, the Dishonest Manager is the most difficult of all of Jesus’ parables to comprehend, but I think it is more easily understood in light of a passage which appears in Luke 12:35-48. Luke 12:35-48 contains a parable about the return of a Master to his estate and the need for his slaves to be prepared when he returns – a typical “second coming” parable. Peter asks, though, “For whom is this parable being told?” and Jesus answers, “Who is the faithful and phronesis (prudent) oikonomos (manager)?” (12:42). “He will put that one in charge of all his hyparchousin (possessions)” (12:44). Jesus speaks of the oikonomos (in Latin, vilicus), a slave who was often put in charge of large agricultural estates, as the Master lived away in a city, as the man in charge of the “possessions.” Since the issue is "management," I think the parables are being told for the Apostles, those in “charge” of the “possessions,” the Church members, and later applicable to other Church leaders generally. The parable speaks about stewardship of possessions, but here it is transferred to the realm of the spiritual, contrasting stewardship of those things that pass away with those things that last forever, people.

Why is this important? Because in 16:1-9 the entire story is told of an adikia (unjust, dishonest) oikonomos (manager). In the Dishonest Manager parable, there is a plousios (rich man), who owns the estate that the manager is running on his behalf. What is the oikonomos (manager) doing in the absence of his Master? This manager is diasporizon (scattering or dispersing; in Mt.26: 31; Mk. 14:27; John 11:52, as with his flock) his hyperchonta (possessions). What does this "scattering" or "dispersing" mean? It certainly cannot indicate good stewardship of the possessions in his care.  The rich man asks the manager to give ‘an accounting of your stewardship”(ton logon tes oikonomias) for he is no longer welcome “to manage” (oikonomein) (16:2).

In v. 3 the manager wonders what he should do, as “the Lord” (ho kyrios) is taking the oikonomian (stewardship) from him. In v. 4, he constructs a plan so that when he is dismissed, people will welcome him into their houses/homes (oikous): he summons his Lord’s (kyriou) debtors (chreopheileton – debtors of money) and asks how much they “owe” the Lord (verb = the same as in Lord’s Prayer = opheilo = debt; what we owe) (16:5). In v. 6, the manager reduces the amount of the debt to 50 jugs of olive oil from 100. In v. 7, he asks, “how much do you owe” (opheilo again) and states that the debt of 100 bushels of wheat is now  reduced to 80. So far, so good, even if he has already proven himself unjust: he is simply a bad manager trying to look out for himself.

Luke 16: 8 is where the difficulty begins for most interpreters, when the Lord praises the manager (oikonomon) of injustice (adikias) because he acted “prudently” (as in 12:42 above, though here it is an adverb, phronimos, and not an adjective): “And his master commended the dishonest manager because he had acted shrewdly; for the children of this age are more “prudent” in dealing with their own generation than are the children of light. And I tell you, make friends for yourselves by means of dishonest wealth (mamona adikias) so that when it is gone, they may welcome you into the eternal homes” (16:8-9). The sons of this age are more “prudent” than are the sons of light, we are told, in dealing with “their own generation”.

The way that this manager forgives debt on the way out of his position seems to be an acceptable method for the rich man, even though the manager gains his salvation (welcomed into “eternal homes”) through forgiveness of debt owed to the rich man. The rich man does not mind getting less olive oil or wheat, but why? As 12:42 stated, and 16:1-9 reiterated, managers must be prudent and their prudence has to do with the forgiveness of debt. These examples instruct Church leaders to act outrageously in forgiving debt, but also that they have the responsibility to forgive debt. In so doing, they encourage love of the Lord, the rich man. But what of the earthly debt, olive oil and wheat, that stands for spiritual debt? Do we get any practical advice on earthly debt or do the olive oil and wheat just stand for spiritual realities?

I think Luke 16:9 is an important clue; it functions as a sort of antiphon to the disciples: if you use your earthly wealth (mamona adikias) to make friends with others, this will count to your being accepted into (“welcomed” as in v. 4) aionias skenas (eternal tents). The issue, as always for Jesus (as seen preeminently in the Gospel of Luke), is that this material wealth is meaningless, so use it to help others with true wealth. The interesting thing is that the parable itself, to my mind, is profoundly concerned with spiritual debt, but by using an example of an actual manager, the antiphon in v. 9 asks you to reverse the parable and use actual money, wealth, possessions, to gain eternal homes. The spiritual and material are deeply intertwined here.

The last entry will be coming soon.