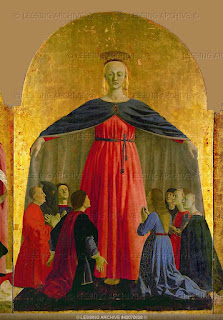 For the fourth podcast, recorded on April 12, 2012,  I spoke with Miri Rubin, a historian of the medieval period. Professor Rubin had recently been on the campus of UST to speak about her book Mother of God: a History of the Virgin Mary. It is a wonderful book and the opportunity to speak to Miri Rubin on campus made it clear that she ought to be on the podcast, speaking to even more people! You will see that apart from bringing a wealth of information, she is a delightful and captivating speaker.  She speaks about Mary and the Eucharist in this podcast, but also about Christianity and Judaism more broadly and their relationship in the medieval period.

She is Professor in the Department of History at Queen Mary, University of London, England. Miri Rubin studied  History at the Hebrew University of Jerusalem and Cambridge, where a PhD, Charity and Community in Medieval Cambridge, in 1984. She taught at Oxford University and in 2000 was appointed to a Chair in Early Modern History at the Department of History at . Between 2002 and 2005 Miri Rubin held a Major Research Award from the Leverhulme Foundation. Between 2004 and 2007 she has served as a Councillor of the Royal Historical society and in 2007 she was elected as Corresponding Fellow of the Medieval Academy of America.

Among her other publications are:


When you listen to the podcast, you will also find that she will soon publish, with Penguin Classics, a translation of the medieval story of William of Norwich, a story which is the earliest account of "blood libel," in which Jews were falsely accused of killing Christians to use their blood in order to make Passover matzos. I mentioned, as well, a novel by Bernard Malamud, The Fixer , a fictionalised account of an actual "blood libel" charge from late Czarist Russia. The novel is superb and I highly recommend it. First things first, though, enjoy the podcast!