Yesterday, news emerged that the Hobby Lobby had been hit with a civil complain from federal prosecutors for the improper acquisition of ancient antiquities. The Green family who owns Hobby Lobby, and the company's president, Steve Green, are the force behind the soon-to-open, $500 million Museum of the Bible in Washington DC. As I have previously posted, the illegal antiquities trade weakens biblical scholarship.
So it is particularly distressing that a family and organization who professes such concern for biblical scholarship is not more thoughtful and concerned about the origin of their antiquities. Not only is the provenance and archaeological significance of an object lost when it is laundered for illegal sale, looters destroy archaeological sites, such as this one in Umma, Iraq.

While this may be the first time that many people have heard of the Museum of the Bible, concerns about the Green family's fast-paced acquisition of thousands of artifacts has been noticed. This has been previously reported (an odd phrase when referring to biblical scholars) in the Daily Beast and The Atlantic by Candida Moss (Notre Dame) and Joel Baden (Yale). Presumably this is also well-documented in their upcoming book Bible Nation: The United States of Hobby Lobby (10/17). 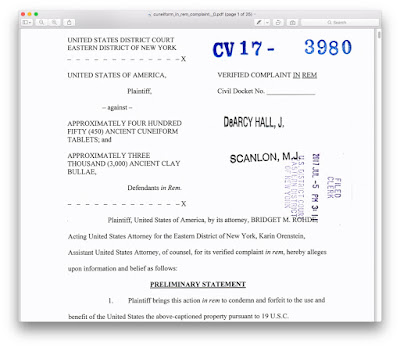 According to the civil complaint posted on the Department of Justice website, the Green family began to search for antiquities related to the Bible in 2009-10. They had arranged to by several thousand artifacts through Israeli and UAE dealers, although they met in the UAE. At the meeting, Steve Green examined thousands of artifacts. "The contemplated sale included 5,548 distinct artifacts: 1,500 cuneiform tablets, 500 cuneiform bricks, 3,000 clay bullae, 35 clay envelope seals, 13 extra-large cuneiform tablets and 500 stone cylinder seals." (pg 8) A consultant told him that the "offering price for the Artifacts was $2,091,000.00 and that while he believed they could be appraised at $11,820,000, he believed Hobby Lobby could negotiate to purchase them for $1,600,000.00. (pg 10). This is absolutely astounding reduction of nearly 90%.

In response to the complaint, Hobby Lobby has agreed to give up the items (450 tablets and 3000 bullae) plus pay a fine of $3 million. Summaries of the details can be found many outlets, including the Atlantic.

As always, Twitter was quick to react and there are a couple themes that I thought were of consequence.

First, some were calling on the Society of Biblical Literature to make a statement regarding this recent development. SBL has, to my knowledge, previously remained silent when worries were expressed about the Museum's lack of concern regarding the provenance of its antiquities. I am interested to see if the guild does in fact make a statement, as they clearly should. They do have a statement, SBL Policy on Scholarly Presentation and Publication of Ancient Artifacts, regarding the proper acquisition and concern for provenance when introducing new artifacts at a conference. ASOR has a similar policy.

As a 27 yr member of the Society, I call on @SBLsite for statement on @HobbyLobby smuggling of ANE artifacts.
— Thomas Bolin (@scaevola67) July 6, 2017

Many other tweeters have utilized hashtags (#HobbyLobbyIsis) or made comments making the connection between illicit antiquities and the funding of terrorism. As far as the ISIS connection, we do have to note the chronology of the events. ISIS was not yet in its current form in 2010, while Steve Green was examining these artifacts. This does not, however, mean that this money did not find its way to fund terrorism. The looting of antiquities has, alongside other smuggling operations, provided funds to terrorist organizations and those who support them. This was already well-known in the field of antiquities and had been reported in both academic (e.g. Bowman 2008; Nemeth 2008, 2010) and popular publications (e.g. Boser, 2010). In fact, as early as 2005 it was reported that 9/11 conspirators were attempting to sell antiquities to fund their time in the US, including flying lessons!  “Like the Taliban in Afghanistan who have learned to finance their activities through opium, insurgents in Iraq have discovered a new source of income in Iraq's cash crop: antiquities.” (Bogdanos, 2007)

I'm usually discrete, but I worked on what you're all enjoying as #HobbyLobbyIsISIS since 2012. And I'm key in other investigations so ... 💅 https://t.co/SOYBWIemPO
— Dorothy Lobel King (@DorothyKing) July 6, 2017


One final reaction on Twitter has been to call out the hypocrisy of the owners of Hobby Lobby. Many of those who don’t shop there would not have heard of this store were it not for the US Supreme Court case Burwell vs. Hobby Lobby. 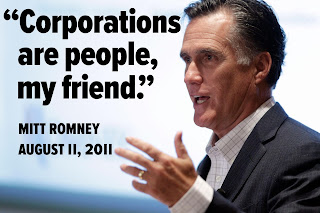 This was a very important case in response to the Affordable Care Act (Obamacare) in which Hobby Lobby argued that the contraceptive mandate violated their firmly held religious beliefs. This was particularly important because it was the first time that a for-profit corporation was recognized as having a religious belief. The argument was summed up by presidential candidate Mitt Romney.

It appears as though there are not going to be any criminal charges because of all of this.  The New York Times reported that a statement from Steve Green said that Hobby Lobby was “new to the world of acquiring these items, and did not fully appreciate the complexities of the acquisitions process.” This does not seem satisfactory. At $4 billion a year, Hobby Lobby has the money to find the right people. However, even that might not have mattered. The civil complaint notes that an unnamed expert warned Hobby Lobby about the risks:

"I would regard the acquisition of any artifact likely from Iraq (which could be described as Mesopotamian, Assyrian, Akkadian, Sumerian, Babylonian, Parthian, Sassanian and possibly other historic or cultural terms) as carrying considerable risk. An estimated 200-500,000 objects have been looted from archaeological sites in Iraq since the early 1990s; particularly popular on the market and likely to have been looted are cylinder seals, cuneiform tablets... " (pp 10-11)

Beyond ignoring this advice, Green did not meet with owners, was unconcerned with conflicting accounts of provenance, paid out the money to many accounts, and had the items shipped under false labels to various Hobby Lobby stores throughout the country. When one considered all these red flags along with the fact that the dealers were satisfied with receiving just 13% of the value, a successful business person should have known to ask questions, if he was so inclined.

Bowman, Blythe A. "Transnational crimes against culture: looting at archaeological sites and the “grey” market in antiquities." Journal of Contemporary Criminal Justice 24.3 (2008): 225-242.

Nemeth, Erik. "Art-Intelligence Programs: The Relevance of the Clandestine Art World to Foreign Intelligence." International Journal of Intelligence and CounterIntelligence 21.2 (2008): 355-374.