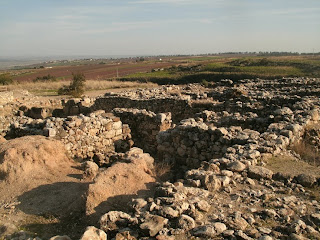 UPDATE: ASOR blog has posted a photo gallery of Hazor.

Tel Hazor is a very significant archaeological site in Northern Israel.  Its excavators even believe it is the most significant site, although those at Tel Megiddo might disagree! There is no disagreement, however, that it is the largest, at around 200 acres.  The city of Hazor is very ancient (from the 3rd millenium to 732 BCE) and was, throughout much of its history, the most powerful city of the region, perhaps ten times larger than Jerusalem.  This all came to an end at the hands of the Assyrian Tiglath-Pilesser III.

Hazor has been in the news lately as the excavators,  Amnon-Ben Tor and Sharon Zuckerman of Hebrew University of Jerusalem, have announced the discovery of a fragment of a monumental sphinx (NPR has an interview with Ben-Tor, good photos of the fragment and excavation can be found at NY Daily News).

According to the excavators, the sphinx comes from the time of Pharaoh Mycerinus (or Menkaure), one of the great pyramid builders. Ben-Tor suggests that the statue likely came to the Galilee long after Mycerinus' time and was probably a gift to the king of Hazor during the time when Egypt controlled the region from the 15th to the 13th centuries BCE.  We know these types of gifts traveled back and forth; for example, we see in the Amarna letters announcements  of loyalty from the king of Hazor to the king of Egypt, we have Egyptian statuary at Tel Beit She'an, etc.  (Incidentally, this raises questions regarding the historical issues surrounding the Exodus.  Since it is absolutely clear that Egypt controlled Canaan during this time, how is it the Moses and his people were escaping from Egypt to enter a land controlled by Egypt?)

The discovery of the sphinx doesn't really change any views regarding the history of Hazor, but it does add more to our understanding of the relationship between Canaanite city states and Egypt, demonstrating that even monumental statues weighing up to half a ton were transported into the region.

I have included a slide show of photos I took at Hazor in 2010.