The Letter of Jude Online Commentary (3) 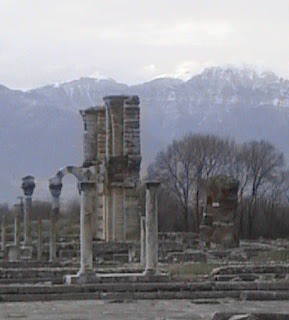 In the first installment, I set out the traditional Greco-Roman letter format and looked at the “Judases” and “Jameses” in the New Testament. There seemed to be only one good option for whom the Judas/Jude to whom this letter is attributed could be, the Judas/Jude who is the brother of Jacob/James and Jesus.  In the second installment, I weighed the arguments on authorship and decided the best evidence does indeed point in that direction. I then looked at what this means for the date of the letter and the location, or place, in which the letter was written.  In this, the third installment, I begin to examine the content of the letter itself, the reasons the letter was sent, and the goals of the letter.

The letter of Jude appears in the NT just before the book of Revelation, so if you are suddenly coming across a dragon that attempts to devour a woman and her son, and beasts from the sea and land, you have gone too far. Turn back, although when you get to Jude you will find that there are a number of apocalyptic elements in this letter as well as in John’s Apocalypse.

1 Jude, a servant of Jesus Christ and brother of James, To those who are called, who are beloved in God the Father and kept safe for Jesus Christ: 2 May mercy, peace, and love be yours in abundance. (NRSV)

A salutation in a Greco-Roman letter consists of the sender, the recipients, and a greeting. The sender, Jude, has already been discussed in the first two installments, as is his relationship to James, and which James it is, so we need not rehash that here. He also describes himself as a doulos of Jesus Christ, which might be better translated as “slave” instead of “servant,” though both are possible.  This seems to have been a fairly common appellation in early Christianity, since Paul calls himself a doulos of Jesus Christ in Romans 1:1 and Galatians 1;10, as do James and  2 Peter. Kelly sees Old Testament  origins in this language (241) and Hartin draws the same connections,  as with Moses in 1 Kings 8:53 and David in 1 Kings 8:66, where both are called a “slave of God” (51). Kelly says that the “underlying thought is that, having been rescued from slavery to sin and death, Christians now belong wholly to him as His slaves. As a self-designation, however, the title has specialized significance: it connotes one who is charged to labour in his service.” (242)

The letter is sent “to those who are called,” which indicates a letter that could have been sent to many churches. This is argued by many scholars, who believe the letter is general or “catholic,” such as Reicke (194-95) Brosend (14) Catherine Gunsalves Gonzalez, 1 & 2 Peter and Jude, 215 and Daniel Keating, First and Second Peter, Jude, 197. Kelly (242-43) and Thomas Schreiner, 1, 2 Peter, Jude, 429 believe that the letter is sent to specific churches because of the particular theological problems that they see the letter addressing, which means it was sent to some churches, but not the whole of the Church. Finally, Hartin, due to the authorship and the connections of Jude and James to Jewish Christianity, states the letter was sent specifically to Jewish Christians.

“Those who are called” definitely includes all Christians, indeed, it was another way to say “Christian” in the early Church, so I opt for this letter being a general, “catholic” letter. It is true, as we shall see, that the letter is addressed to specific errors or problems in the Church, but even when problems only occur in one branch of an organization, it is often taken as an opportunity to warn the whole corporation about problems or the threat of problems and an attempt to forestall such a problem appearing elsewhere. This is what I see taking place with Jude’s letter. It might have been, in the first order, sent to Jewish Christians, since these were the Christians with whom the Jerusalem church was most in contact, but since the “called” are inclusive, I take the recipients to be inclusive of the whole Church.

“Those who are called” are also described in two other ways:  “beloved in God the Father” and “kept safe for Jesus Christ.” There are two interesting aspects to these descriptions: one is that there is an “eschatological,” or end of the world, sense to these descriptions; and two is that they reflect the elements of the Servant is described in Isaiah. The first element has to do with the description of those who are called being “kept safe” (Richard Bauckham, Jude and 2 Peter, 26). The verb, têreô, found as a participle in Jude, has the meaning of “kept safe,”  “to take care of” or “guarded.” So the Christians, the called, are being “kept safe” or “guarded” for Jesus Christ. This could mean being kept safe or guarded from error, but it could also indicate that they are being protected and guarded for the coming end when Jesus returns. I think this is a clear sense of the “guarding,” being protected until the return of Jesus.

Both Bauckham (25-27) and Keating (197) believe that the threefold description of “called,” “beloved,” and “kept safe” might be borrowed by Jude from the servant songs in Isaiah 40-55, which is possible. It also seems to me that the Christians, like Israel, understood themselves as called, and a part of this call was God’s love and protection, which is seen throughout the Old Testament, not only in Isaiah.  I have nothing against the suggestion that Isaiah might have influenced Jude, I just see this as possibly a broader influence and a natural understanding of the experience of God. It is, obviously, a Christian innovation to attribute the protection to Jesus Christ himself.

I should mention, too, that some scholars do not approve of the translations “beloved in God the Father” and “kept safe for Jesus Christ.” Schreiner particularly offers these translations (from the NIV): “who are loved by God the father” and “kept by Jesus Christ” (427). He has a fairly long discussion of these translations (427-431) in which he argues for the symmetry of being “loved by” and “kept by,” but the bottom line is that the NRSV does a better job of translating the Greek itself, especially the en, which means in, in “beloved in.” Now translation discussions are important, sometimes very important, but however one translates these phrases, it seems quite clear that those who are called are loved by God and protected by Jesus Christ. I do prefer the NRSV translation, since it is truer to the original text, and those who are beloved in God and kept safe for Jesus Christ are being kept safe and beloved by God and Jesus Christ. There is no other agent than God.

The greeting to thee churches, “may mercy, peace, and love be yours in abundance,” also garners some attention, though the Greek is clear and simple, as are the wishes the greeting calls forth, because many early Christian letters have a twofold greeting. The most common twofold greeting in Christian letters is “grace and peace” (Romans 1:7, 1 Corinthians 1:3, Galatians 1:3, etc.), although 1 Timothy 1:2 and 2 Timothy 1:2 have “grace, mercy and peace.” The most interesting aspect of this is actually that “grace” is missing from the greeting, but the word “mercy” must include aspects of “grace.” Besides, why should every early Christian letter have the same or identical greeting?  “Mercy and peace” are found in some Jewish letters (2 Baruch 78:3) and that Jude would add “love” (agape) to this makes sense. It is fairly Christian, is it not?

So, here is the beginning of the letter, sent to Christians, who are loved and protected by God, wishing them mercy, peace and love. It’s a beautiful start to the letter!