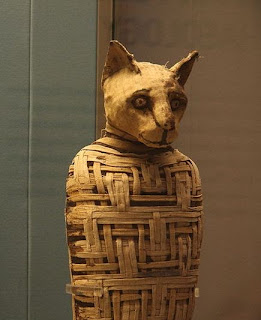 Although pigs are not so popular, I am told by a reliable source that any post featuring cats gets at least 2,000 hits.

Let's put that to the test.


I found a new blog, via PaleoJudaica which I enjoyed reading. Mystical Politics is blog by Rebecca Lesses of Ithaca College who researches Jewish magic and mysticism, although she also seems to like cats.

In a discussion about the Arabic names for a domesticated cat (which now seems to have appeared many millenia earlier than previously thought), she writes in a post ('More on Semitic Cats') about the onomatopoetic nature of cat names,

One name for cats in Arabic is bass or biss - meaning "cat" and "sound made to a cat." As [Huehnergard] comments, "They are similar, of course, to English puss (also in other Germanic languages) and to Berber muss (found also in Moroccan Arabic), all of which are probably onomatopoetic imitations of feline hissing."


[The Egyptian] word was miw, with Coptic emou - as he says, miw is imitative, and seems to me to be like our English word miaow, for the sound a cat makes... [H]e comments that one of the Arabic terms for cat is al-ma'i'a or al-ma'iyya - "the form of a participle of the onomatopoetic verb ma'a, 'to mew.'" It might also reflect the ancient Egyptian miw.


It is an odd feature that, while domesticated cats were running around Palestine for millenia, and it is clear that other societies seemed to engage the animal, we do not have references to it in the HB (modern Hebrew uses khatul).

Now for the pigs... Unlike cats, pigs are mentioned frequently in the Hebrew Bible (mostly in Leviticus).

Israel Finkelstein has posted some new articles on his academia.edu page.  One that I found very interesting is titled 'Pig Husbandry in Iron Age Israel and Judah; New Insights Regarding the Origin of the "Taboo."' (Lidar Sapir-Hen, Guy Bar-Oz, Yuval Gadot and Israel Finkelstein;  ZDPV 129 [2013] 1).  Some of you may be familiar  with Israel Finkelstein, who has frequently appeared on television programs dealing with 'biblical archaeology' .  He is primarily known for leading the excavation at Megiddo and for being a proponent of what is often called low chronology, which could perhaps be the subject of another post.

While this may not initially seem very exciting, I think there are a few points in this article which are very important.  Its main purpose is to suggest an origin of the taboo on eating pig. The concluding suggestion is that the taboo comes from a social distinction, not with the Philistines, but from the migration of pig eating Israelites into non-pig eating Judah following the upheaval brought to the northern region by the Assyrians. The Judahites then codified their traditional dietary practice into a legal tradition, presumably to create distinction and encourage the migrants to conform.

What I found to be the more interesting point was made earlier in their article, namely, that the presence or absence of pig bones cannot be used as a marker of ethnic identity in the archaeological record.  It was previously understood that, particularly in the Shephelah, the lowlands between the highlands of Judah and the coastal cities of the Philistines, the presence or absence of pig bones was a way to determine if a site was Philistine or Judahite.  It is now clear that the evidence just doesn't support this approach anymore.  I am not sure how much this will impact archaeology in the Shephelah, but it will clearly cause some to look more carefully at other identifiers when determining the nature of a site, rather than relying on the simpler method of using pig bones as a marker.