This is the thirty-fifth installment, comprising Act 5, Scene 6, chapter 12: 13-17, in the online commentary on the Gospel of Mark, which I am blogging on throughout the liturgical year. Please see the thirty-fourth installment here. Links to the entire series are available in one spot at The Complete Gospel of Mark Online Commentary. 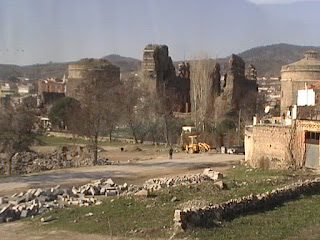 13 Then they sent to him some Pharisees and some Herodians to trap him in what he said. 14 And they came and said to him, "Teacher, we know that you are sincere, and show deference to no one; for you do not regard people with partiality, but teach the way of God in accordance with truth. Is it lawful to pay taxes to the emperor, or not? 15 Should we pay them, or should we not?" But knowing their hypocrisy, he said to them, "Why are you putting me to the test? Bring me a denarius and let me see it." 16 And they brought one. Then he said to them, "Whose head is this, and whose title?" They answered, "The emperor's." 17 Jesus said to them, "Give to the emperor the things that are the emperor's, and to God the things that are God's." And they were utterly amazed at him. (NRSV)

The push against Jesus is now the driving force of the whole narrative; his teaching, miracles, and healing seem to belong to another world. The entire focus is now on one skirmish after another, raising the suspense and the tension. One scene of conflict and adversity fades and another takes its place. The viewer is on pins and needles as there can be no resolution, except Jesus’ death, if those who oppose him do not accept the source of his authority, an authority he is said to hold in his very being. How can the powers that be acknowledge a power they do not believe? Jesus has in some ways pressed the issue of his authority, his Messiahship, since Act 5, Scene 1, asking all of the religious authorities to decide for or against him; now the religious and political authorities press back. Even if they are wary of the crowds’ responses, there is no other way open to them. Since they do not accept his power and authority, how can they let him wield it without opposition?

Act 5, Scene 6 brings us back, in fact, to the initial opposition to Jesus expressed openly in 3:6, Act 1, Scene 9, where Mark writes “the Pharisees went out and immediately conspired with the Herodians against him, how to destroy him.” This plan has been in the making since the early stages of Jesus’ Galilean ministry. So, when we read that “they sent to him some Pharisees and some Herodians to trap him in what he said” (12:13), this is only the direction Mark has been leading us from the beginning of the Gospel. It is the second and last time the two groups, Pharisees and Herodians, are paired in the Gospel – it appears elsewhere in the Gospels only in Matthew 22:16. It also raises the question, who are the “they” who sent the Pharisees and Herodians to trap Jesus? It must, of course, from context be the Temple authorities, which means that the entire religious and political establishment is now gunning to bring Jesus down together. Mark has presented all of these groups as opponents of Jesus, but now we see them working in conjunction.

The Pharisees and Herodians present to Jesus a scenario which has both religious and political ramifications. They ask him,

“Teacher, we know that you are sincere, and show deference to no one; for you do not regard people with partiality, but teach the way of God in accordance with truth. Is it lawful to pay taxes to the emperor, or not? Should we pay them, or should we not?” (12:14-15)

The “trap” they set for Jesus consists most significantly in the content, whether he will disregard political considerations and argue that religiously it is improper to pay a tax to the Roman oppressors, or whether he will disregard religious considerations and state that it is just to pay a tax to the Roman rulers. They have hoped to set the “trap” with honeyed words – “we know that you are sincere, and show deference to no one; for you do not regard people with partiality, but teach the way of God in accordance with truth” – but Mark explains that Jesus knew “their hypocrisy”(12:15). Their words lacked sincerity. They do not so much care for Jesus’ answer, but that they can accuse him one way or another on the basis of his answer. If he says the tax is lawful, which must mean according to Jewish law, perhaps his religious bona fides can be attacked, but if he says the tax is not lawful, he might be accused on the basis of insurrection against the Romans, with whom the Herodians are formally aligned. It is intended to be a Catch-22.

Jesus perceives the true nature of the challenge: “Why are you putting me to the test? Bring me a denarius and let me see it” (12:15). The verb translated as “test,” peirazo can also be translated as “trial,” which is what its noun form peirasmos means in the Lord’s Prayer for instance.  Jesus asks about the purpose of this “trial,” but he already knows that he is intended to stumble. By asking for the denarius, the actual physical evidence of the concrete poll tax, he places the burden upon his interlocutors. When they bring the coin to Jesus, he asks them, “‘whose head is this, and whose title?’ They answered, ‘The emperor's’”(12:16).  What he has asked them to do is answer a simple statement of fact about what is the very heart of taxation: money.

Jesus’ answer is just as simple and straightforward.  “Jesus said to them, ‘Give to the emperor the things that are the emperor's, and to God the things that are God's’”(12:17).  But if the answer is simple, as I suggest, what does it mean precisely? There is a temporal order to which, Jesus says, we have a responsibility. More importantly, there is a divine order and it is to this order which we must also give back all that is due. The extent of what is due to God, however, Jesus does not, or cannot, explain as simply as pointing to a coin. The limits of good government are temporal and material; the demands of God are spiritual and, I would argue, unlimited, though this pushes beyond the limits of the text. One can make an educated guess, though, on the basis of the Gospel thus far, in which the material always points to the greater good of the spiritual.

The scene ends with this statement, “and they were utterly amazed at him” (12:17). Who are “they” we ask once again? It could be just the Pharisees and Herodians who have sought to trap Jesus, to divide him as tending to favor the religious or the political, but who has given both their due. It could perhaps be the crowd in general, including all of the religious leadership, who are amazed at how he has walked through the trap set for him and given the temporal and spiritual realities their due. His answer would probably not satisfy Jewish zealots, however, who desired their country be rid of a foreign oppressor, so I tend to think that the “amazement” is on the part of the religious authorities who have set the trap and who realize that his answer has won the crowd. They cannot arrest him here and now.